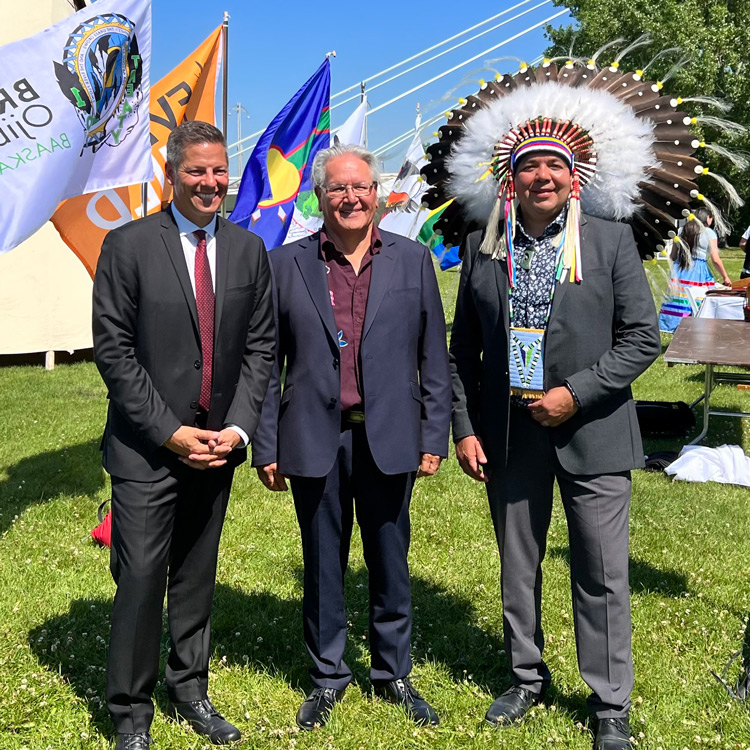 Today, representatives from Treaty One and the City of Winnipeg met to celebrate a key milestone in the creation of Naawi-Oodena, the new urban reserve being developed on the former Kapyong Barracks land in Winnipeg.

Today’s celebration marked the official signing of the service agreement, which is one of the single biggest steps forward to the creation of the new development. During the ceremony, Treaty One Chair, Chief Gord BlueSky took a moment to honour former Brokenhead First Nation Chief Harvey Olson as the man who started the process of converting the former military base to an urban reserve.

Today, Olson works with Manitoba USKE as the organization’s Additions To Reserve specialist. He counsels First Nations across Manitoba on how to create their own urban reserves.

“We’re extremely proud to have Harvey working with us,” said USKE Executive Director Patricia Mitchell. “When the federal government declared the Kapyong Barracks land as surplus, it was Harvey who made the first move to claim that land on behalf of his people. He knew they had a strong case to make the land claim and without him we may not be signing this agreement today.”

The federal government ended up negotiating with Treaty One, which is now close to being able to begin construction on what will be called Naawi-Oodena, which means “centre of the heart and community” in the Anishinaabe language. Brokenhead Ojibway Nation will be one of seven First Nations within Treaty One that will directly benefit from owning the new development.

Naawi-Oodena is one of the most important urban reserve developments in Canada today. It will turn the 160-acre site into a diverse and vibrant mixed-use community that emphasizes Indigenous design excellence and connectivity with surrounding established neighbourhoods. It will include residential, commercial and cultural elements in the community design.

No comments to show.

Manitoba USKE operates as a technical land management body. USKE’s main objective is to provide capacity building, training and expertise in the area of land management for First Nations Lands Managers in Manitoba.